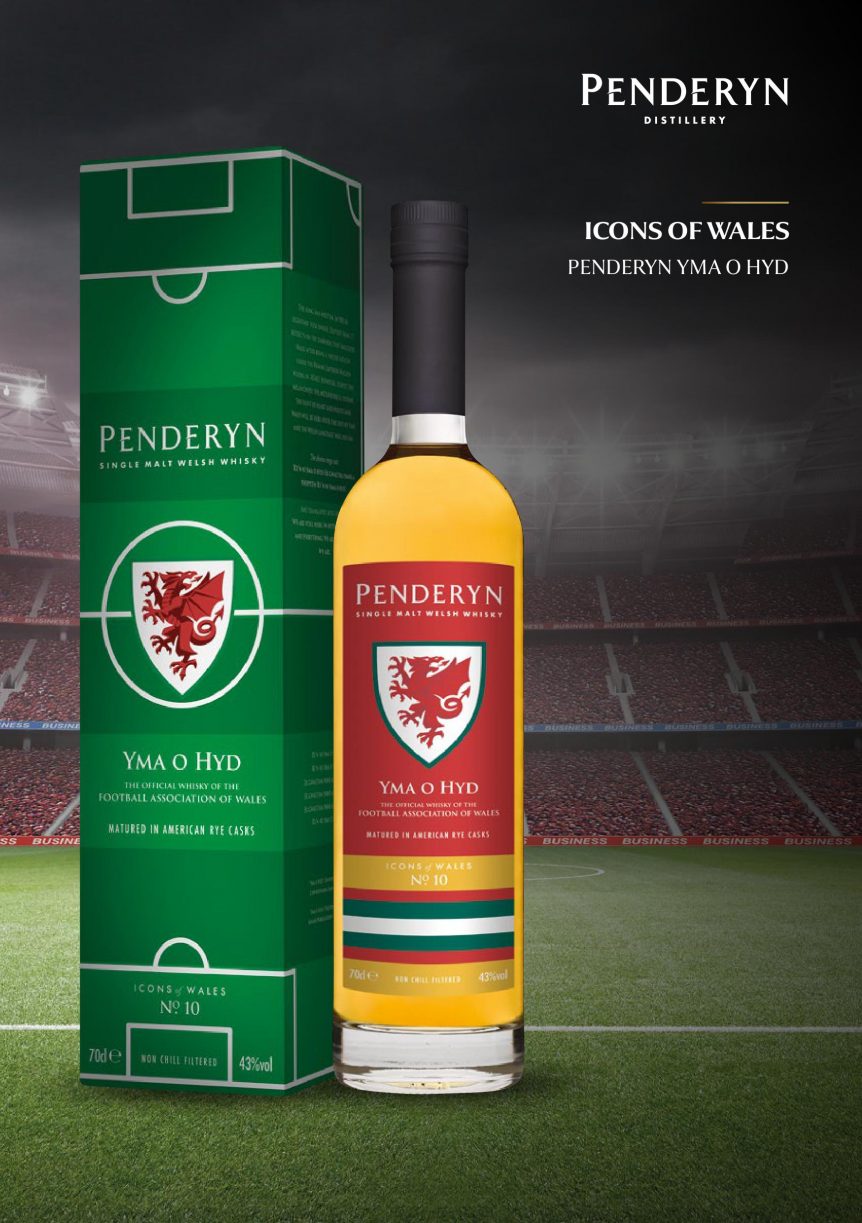 This November, Wales’ men’s international football team will be heading to the World Cup for the second time ever. The Dragons barnstorming qualification for the 2022 tournament has inspired Welsh professionals and brands to get behind the lads as they limber up for an autumn out east.

At the forefront of support for the Welsh side is Penderyn Distillery, famous globally for its expert-approved single malt whisky. Working in tandem with the FAW, Penderyn has even produced its own signature World Cup single malt, Yma o Hyd, to celebrate the Dragons success in reaching the Finals for the first time since 1958.

“Penderyn is delighted to be working in partnership with the FAW to produce a special celebration bottling of our single malt for Wales’ appearance at the World Cup,” says Stephen Davies, CEO for Penderyn Distillery. “This partnership also affords us the opportunity to continue to develop our distribution in the Middle East for our Penderyn Single Malt Welsh Whiskies, Siddiqui Rum, and our other spirits.”

Certainly, Penderyn is no stranger to overseas success, and the distillery team is hopeful that their home-grown glory will rub off on their football stars. The whisky giant has gained an impressive following on the other side of the Atlantic, and continues to entice taste buds out east. With football fans looking towards the World Cup this November, their latest bottling could prove to be a crucial step further to international success.

The Welsh men’s side was celebrated recently via a food and drink showcase at Doha’s British Embassy. The celebration, chaired by Food & Drink Wales (and hosted by the HM Ambassador to Qatar), saw a variety of important figures from both Welsh and Qatari markets in attendance.

The event marks a continued boom for Welsh food and drink overseas, with the 2021 international market for Welsh cuisine booming at an exceptional £640 million. With Penderyn bottlings such as their Rhiannon ‘Icon of Wales’ line picking up international critical acclaim, it’s a fair assumption that Penderyn Distillery is right at the front of the Welsh onslaught.

“Much like our lads going out to the World Cup this autumn, Penderyn is always working hard to expand overseas – while keeping our feet firmly rooted at home,” says Davies. “Our Yma o Hyd bottle reflects this – we want the team to know that the whole of Wales is behind them – and regardless of what happens, it’s been a triumphant couple of years for Welsh football.”

Penderyn’s Yma o Hyd World Cup bottle is named after and inspired by Dafydd Iwan’s rousing anthem, which translates as ‘still here’. The song is commonly played and sung at football matches across Wales, and will likely follow the Dragons fans later this month.

The recent food and drink showcase, coupled with Penderyn’s landmark bottling, will hopefully help to inspire Wales’ men as they seek to make their mark in the first-ever autumn tournament. The World Cup promises to be all the more dramatic, too, as Wales will face off against England in the group stage of the tournament. Could this national rivalry make or break the Dragons chances in the competition?

The Yma o Hyd World Cup bottle is available now, via their online store, in Penderyn Distillery shops and in selected UK stores and larger supermarkets, for football and whisky fans to enjoy in celebration of Wales’ fantastic road to the World Cup Finals. For many, it’s the first milestone of its kind in a generation. Complete with presentation box designed especially for the tournament, Welsh legends such as singer Dafydd Iwan and actor Michael Sheen have already received their own presentation bottles as the opening matches beckon.

“They’ve got this far – we’re behind them every step of the way,” says Davies of the Welsh side’s success. “We want the lads to know that while they’re thinking of home in a far-off land, home will be thinking of them – and while we can’t all get to the World Cup this November, we’re doing what we can to show our support.”

“They might call our Dragons underdogs in this tournament – but we’re still here – yma o hyd – and the whole team at Penderyn is gearing up for some giant-killing action!”

Wales’ opening group match in Group B – against the USA takes place on Monday, 21st November at 7pm UK time.