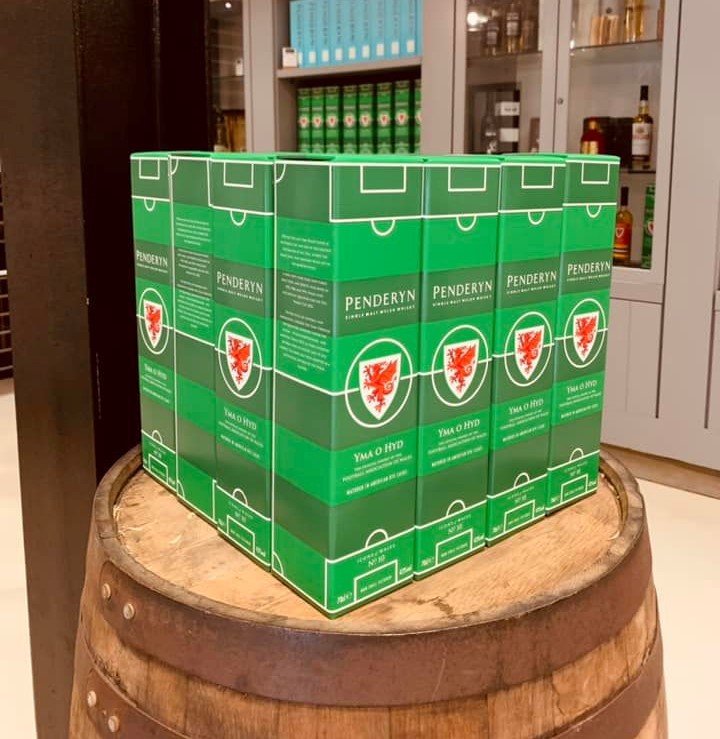 Wales’ triumphant qualification for the 2022 Football World Cup in Qatar has brought excitement level to fever pitch across the country.

“64 years is a long time – it’s more than a generation,” says Penderyn CEO Stephen Davies. “It’s going to be an exciting winter for Wales, and it’s only fitting we pay tribute to the incredible work the national side has put in to get this far. Fingers crossed, they’ll take it all the way – we’re behind them!”

Yma o Hyd is the Red Wall’s anthem – poetic, stirring, and boasting an infectious chorus, Penderyn has named its limited-edition single malt in honour of the enduring spirit of Welsh football – and how it continues to unite people. The song’s been a staple in national grounds and at international matches since the 1980s, having been penned by folk legend Dafydd Iwan.

“We’ve produced a strong, stirring bottling that really reflects the mood and sense of resilience portrayed through Dafydd Iwan’s song,” says Davies. “This is a song that speaks of the dark times Wales has gone through – and yet, we are all still standing, speaking our language, singing our song, and that we’ll live on no matter what happens.”

“I think that’s hugely apt as a football anthem – and it’s certainly inspired us to mark the occasion. Watching our men head to the finals for the first time in decades is, for a lot of us, a maiden voyage – and it could well be a crowning moment for Wales.”

“The chorus is infectious – ‘Ry’n ni yma o hyd, er gwaetha pawb a phopeth, ry’n ni yma o hyd’. ‘We are still here – in spite of everyone, and everything – we are still here’. It’s an anthem that speaks volumes about the last few years we’ve all been through, as well as Wales’ remarkable campaign so far. It’s worth celebrating, and we know our customers will feel the same.”

“The excitement amongst the team and The Red Wall is already at high levels, as we continue to move closer to the World Cup. With the launch of this special edition whisky, which not only recognises the team’s achievements so far but also recognises the vital role Wales supporters play in the success of our national team, it’s clear to see the support the team have going into this World Cup” explained Ian Davis, Chief Commercial and Engagement Officer, Football Association of Wales.

Penderyn’s Yma o Hyd is a single malt that provides a floral, heady scent that suggests notes of caramels and toffees, with hints of pear and apple. It boasts a sweet, caramel finish that’s peppery on the swallow – and its smooth, fruity palate adds an intriguing, spicy kick.

Whisky fans will be able to purchase the first bottles of this official World Cup bottling by the end of August, three months ahead of international action kicking off on 20th November. A winter World Cup is an entirely new phenomenon – with Welsh fans gearing up to cosy down and watch the Dragons with a warming glass of Penderyn Yma o Hyd.

Davies and the team at Penderyn are immensely proud of their heritage and humble beginnings, with their maiden distillery having expanded into a new Llandudno site in 2021, and with a third location opening up by 2023. The brand has made waves in the whisky industry not only thanks to its continued international awards success, but also through its appealing ‘Icons of Wales’ line – a series of limited single malts paying tribute to heroes and moments of Welsh history worth remembering.

“It’s important we show our passion for our homeland on the international stage,” says Davies. “We’re in a perfect position to share Welsh legend and heritage through our whiskies – and while our bottlings travel far, our hearts remain homebound. It’s also why we want to support our national side at the World Cup this year – it’s an incredible chance for the Dragons to show the world what we can do.”

“Yma o Hyd represents so much about the Welsh spirit – and while you can’t contain it all in one bottle alone, Penderyn intends to continue raising the flag all over the world. And, it’s true what Dafydd Iwan says – we will weather storms and bad times – no matter what life may bring, Wales is still here, still going strong, and we’ll continue to put our heritage on the map.”

You can enjoy Yma o Hyd, available in stores and online, from late August 2022.