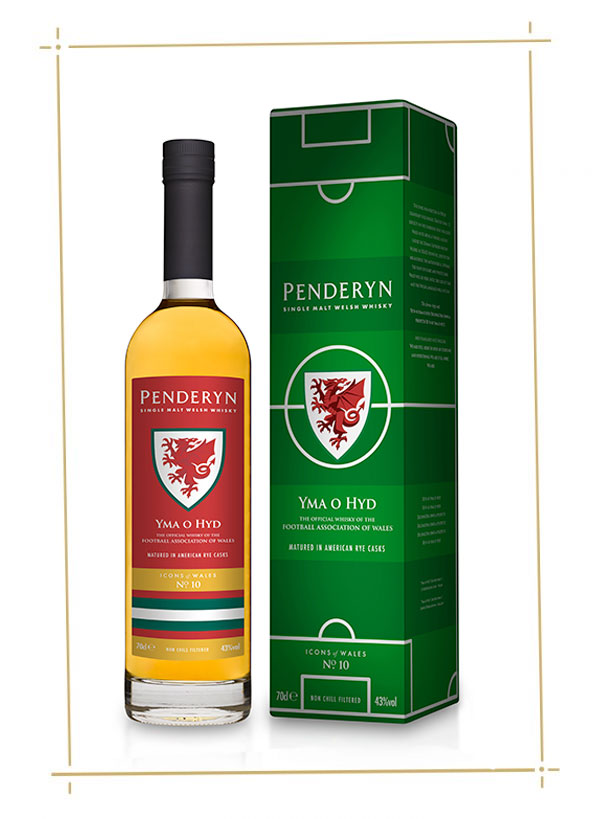 The 10th in Penderyn’s Icons Of Wales Edition whiskies is called YMA O HYD. This is a patriotic anthem, written by Dafydd Iwan, and has been adopted by the Red Wall (Welsh football supporters). This whisky is produced in partnership with FA Wales as their official whisky for the Wales campaign at the World Cup in 2022.

Stephen Davies (Penderyn’s CEO) said, ‘Wales getting to the World Cup for the first time since 1958 was an incredible achievement, and Dafydd Iwan’s song is a great patriotic anthem which has been picked up by Welsh football supporters. So it was fitting that we celebrated Wales’ achievement by naming this Icons of Wales Edition #10 after this wonderful and emotional song.’

BBC Radio Wales’ Roy Noble interviewed Dafydd Iwan at our Penderyn Llandudno Distillery. You can see the interview in English here, and in Welsh here. You can watch Dafydd Iwan singing with the Welsh crowd before the Austria game here, and a version with English subtitles here.

This 70cl bottle has an abv of 43% and is matured in American Rye Casks. Delivery to UK only.

(Icons #9 will be out next month. We had to put YMA O HYD into production first.)

Finish: A caramel sweetness with herbal notes and peppery spices.

You can buy this bottle (UK only) here.