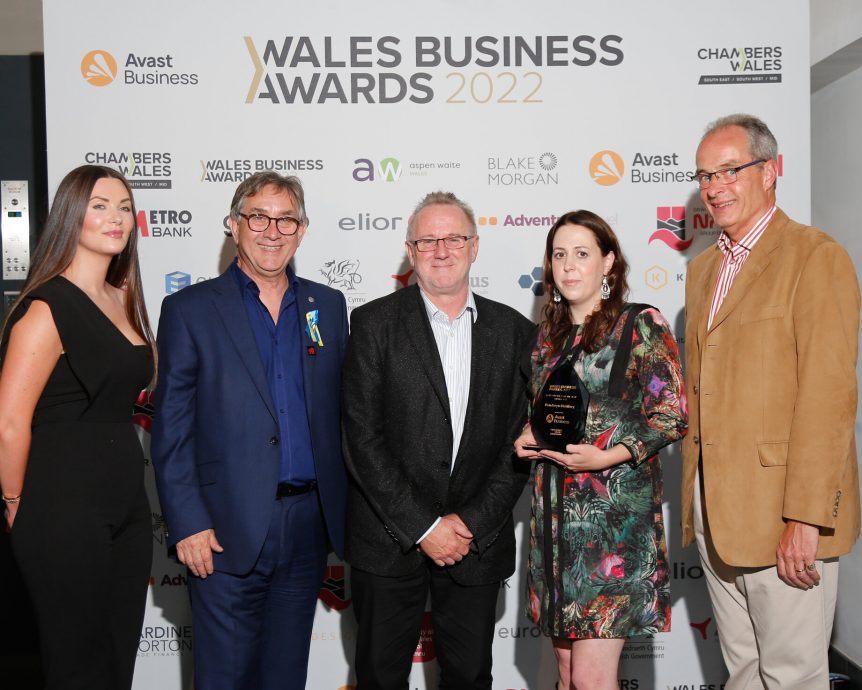 Over 180 entries from businesses from across Wales were whittled down to 10 winners across the 10 categories, plus an overall Wales Business of the Year, which went to Rhondda Cynon Taff based Penderyn Distillery.

Penderyn’s Stephen Davies (CEO) and Laura Davies (General Manager of Distilleries), 3rd and 4th from the left, accepted the prize.

“To be singled out as Wales Business of the Year is a huge honour, especially as we were in the company of so many brilliant businesses named as finalists. Distilling is an embryonic industry in Wales, and we are so grateful for the continued support our distinctly Welsh brand continues to receive from both our customers and the business community. Congratulations to everyone in the team, and thank you for the individual parts played by all in helping us gain this recognition.”

Now in their 19th year, the awards provide SME businesses across the country with the opportunity to compete for Wales’ most prestigious accolades.

Paul Slevin, President of Chambers Wales South East, South West and Mid, said: “What a night for Welsh business. There was such a buzz in the room, and it was great to see so many businesses celebrating their success and all they have done to support the Welsh economy.

“The judges had an incredibly tough time deciding on the winners for each of the categories, which just goes to show the quality of the entrants this year.

“We wanted to do things a bit differently this year, and to crown our very worthy winners at St Fagans, Wales’ most popular heritage attraction, was truly special. The event wouldn’t have been possible if it weren’t for the support of our sponsors, to whom we’re extremely grateful.”