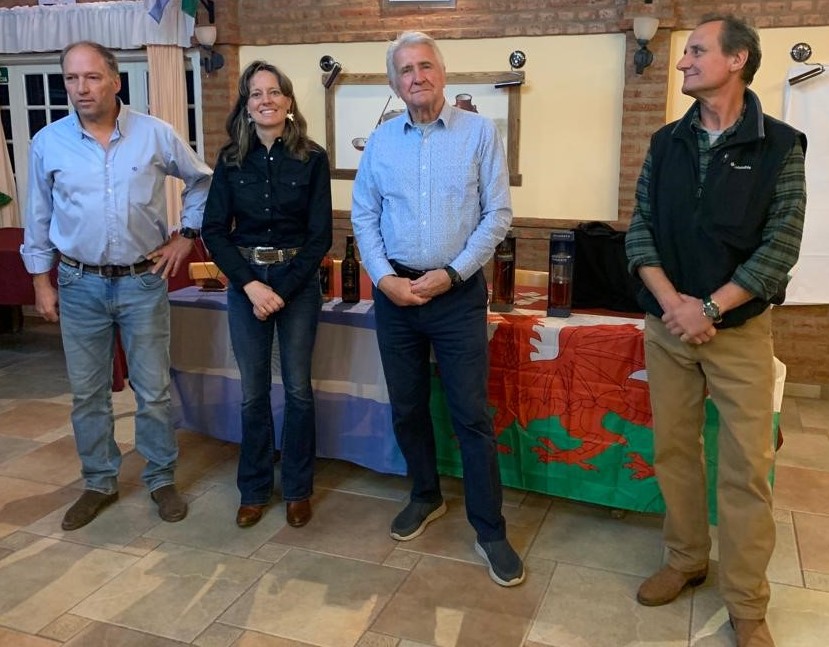 At the end of March 2022, Professor Brian Morgan, one of the Founders and First Chairman of Penderyn Whisky, and his wife, Yvette, visited Welsh Patagonia following an invitation to give a talk on the Penderyn brand to the Welsh speaking community in the Chubut region.  They spent a hugely enjoyable few days touring around some of the interesting historical centres in Trelew, Gaiman and Port Madryn – they heard about the incredible achievements of those early settlers from Wales who first landed in Patagonia in 1865.

On one memorable afternoon they were invited to visit the Draig Goch (Red Dragon) Rugby Club in Gaiman where Brian was pleased to present a ‘Penderyn’ branded Rugby Ball to the Club.

In the evening, there was a tasting of Penderyn whisky at the Ty Gwyn Tea House in the centre of Gaiman, organised by the owner (and a great whisky fan), Ricardo Irranni.   At the event, a local whisky distillery, La Alazana, from Trefelyn in the western area of Patagonia was also present.  The local distillers were very keen to partner Penderyn at the event and had travelled 600 kms from their distillery in the Andes to provide a wider range of single malt whiskies for the tasting.

La Alazana made two whiskies available for the tasting – their Patagonia Single Malt and their new, slightly peated whisky.  Penderyn provided their Port Finished Single Malt along with their Rich Oak whisky which had been matured in ex-European wine casks.

To begin the evening, Brian gave a fifteen-minute presentation on the history and provenance of Penderyn Single Malt whisky.  This ranged from the building and commissioning of the ‘Faraday Still’ in the Brecon Beacons in the late 1990s, to the opening of the visitor centre in the early 2000s and concluded with examples of the successful whisky brands that Penderyn distils today.  Lila, co-owner of La Alazana, who speaks perfect English (as well as Welsh and Spanish!), then gave a lively introduction to the history of their 11-year old distillery and described the latest additions to their range of single malt whiskies.

Ricardo (far left in the pic) introduces the whisky tasting at Ty Gwyn alongside Lila (on Brian’s right) and her husband Nestor (on his left), owners of La Alazana.

Brian presented a visual representation of the history of whisky distilling in Wales and the early aspirations of Penderyn to create a whisky that merits the accolade of Welsh Gold – ‘Aur Cymru’.

After the presentations, the 30 guests were invited to sample, in turn, the four whiskies on offer – beginning with Penderyn’s Port Finish, then La Alazana’s Patagonia, followed by Penderyn’s Rich Oak and La Alazana’s Peated.

The whiskies were very well received by a discerning audience of single malt aficionados, and the bottles did not last long!  The guests were amazed at the smoothness and exceptional flavours on offer from the contrasting whiskies.

During and after the tasting, in typical Welsh tradition, the guests assembled around Hector at the piano to hear Billy Hughes, Chiche Hughes and Andres Evans sing some wonderful Welsh and Argentinian melodies, including Calon Lan and Sospan Fach!  The evening ended, at around midnight, with a rousing chorus of Hen Wlad Fy Nhadau.

It was a really memorable gathering and everyone expressed the hope that it would not be the last whisky event in Welsh Patagonia at which the local whisky could be enjoyed alongside the famous whisky from Wales!  Indeed, there was a suggestion by the host, Ricardo, that La Alazana and Penderyn should begin to work closely together to ensure that these two outstanding whiskies, with undeniably strong Welsh connections, are brought together again in the near future to be tasted at whisky events on both sides of the Atlantic Ocean.