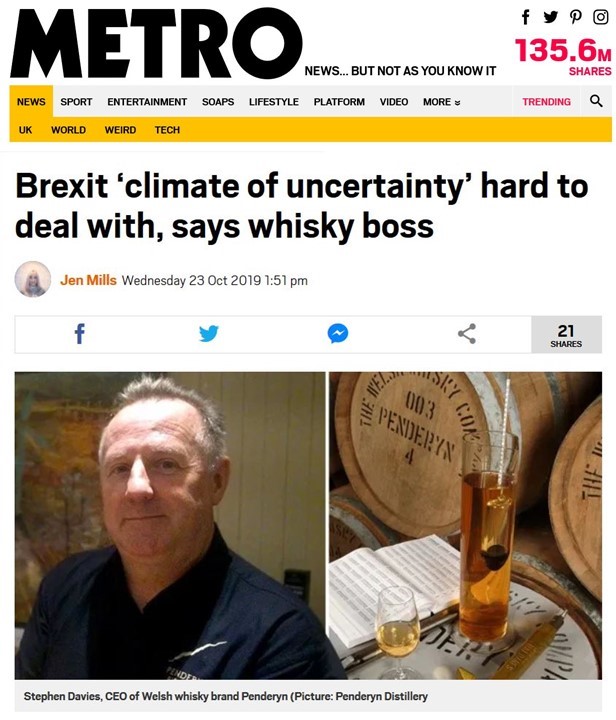 This is a transcript of an article that appeared in todays’ Metro. The original article is here.

‘The head of a prestigious UK booze maker has told Metro.co.uk the EU withdrawal saga is making it harder to do business. Stephen Davies, CEO of Welsh whisky brand Penderyn, said: ‘we just don’t know what the rules are going to be’. He said the company imports glass bottles from France and had to tie up money in stockpiling them earlier this year in case getting hold of them becomes more difficult. They are also having to fulfil more orders from the continent than usual as buyers they export to are worried they will not be able to get the brand as easily post-Brexit. He said:

‘Everybody is kind of panicking a little in Europe and ordering whisky from us, because they want to make sure they’ve got continuity. ‘In a way, that’s quite a good problem to have but of course if there’s another extension we don’t know. It’s just so difficult to deal with the uncertainty.’

Mr Davies is concerned about disruption and potential tariffs imposed after Brexit. He says the company does not have a problem with exporting as the landscape currently stands, so does not envisage particular opportunities coming from the UK exit.

‘In terms of Brexit, it’s about trying to keep continuity,’ he said. ‘We’re very lucky that [whisky] doesn’t have a particular shelf life, so if it gets stuck in customs for three weeks it’s not going to be a problem for the product. But it’s still going to be a problem for the business because it’s business interruption. If you can’t get product through, you can’t get product into retail. That would be a big issue for us.’

At the moment, a trade deal with the US would not change much for them as Welsh whisky can be exported there tariff-free.

However, this could change – something Donald Trump illustrated when he imposed 25% tariffs on Scotch and Irish whisky made in the UK earlier this month. Mr Davies said he was concerned about any potential impact of Brexit which could make trading with Europe more difficult.

‘We distribute right across the European Union,’ he said. ‘Europe is integral, not just to us but to the whole malt whiskey industry. It’s not a great situation. As a business we are building two new distilleries, looking to expand and grow exports outside the European Union. It’s not stopping us doing those things but when you end up absorbing cash and resourcing to a short-term and then ongoing situation like Brexit, it’s not very helpful, especially not as a small business where cash is everything.’