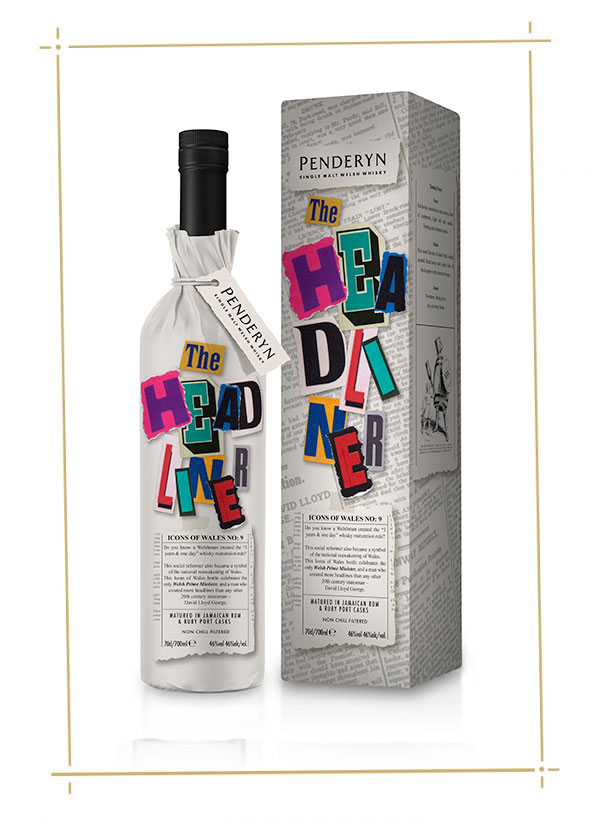 Which statesman of the 20th century made more headlines than any other? Not Churchill, but David Lloyd George – Wales’ only UK Prime Minister. Without Lloyd George, the premium whisky industry in Wales wouldn’t have existed – and that’s exactly what world-class distillery Penderyn is celebrating with its new The Headliner bottling.

The Headliner is Penderyn’s ninth landmark ‘Icons of Wales’ bottling, boasting an ABV of 46%. This limited edition whisky arrives with a distinctive taste through its unique maturation in ruby port and Jamaican rum casks. It’s a line that doesn’t celebrate a specific person or figure, rather, it highlights a moment in time that’s enabled the distillery to thrive over the past two decades.

For Penderyn, The Headliner is an important bottling as it pays tribute to the (perhaps accidental) birth of the premium whisky industry across Wales.

“David Lloyd George is widely remembered for social reformation and for his leadership towards the end of World War I,” says Stephen Davies, CEO for Penderyn. “But, those of us in the Welsh whisky industry remember the choices he made to kickstart premium spirits in Wales – even though the whisky boom was an after-effect of his reforms!”

“Lloyd George actively restricted distilleries and public houses with higher taxes and opening hours. That meant any whisky distilled across Wales was essentially fermenting for longer – meaning we ended up with premium spirits completely by accident.”

Davies refers to the famous ‘three years and one day’ rule, a crucial facet of Welsh whisky history that The Headliner represents. Whisky had to be kept in casks for the period of time mentioned – which led to a premium product that stood apart from other single malts of the day.

Lloyd George brought in the Immature Spirits Act of 1915, which – while restrictive for distilleries and pubs in terms of immediate revenue – changed the Welsh distilling landscape for the better.

“The domino effect was astounding,” says Davies. “Word spread far and wide about new tastes and textures in whisky developed as a result of longer cask time. That was purely as a result of Lloyd George restricting drinking laws to reduce alcohol-related illness. We have much to thank him for!”

The Headliner bottling hits store shelves and is available from Penderyn’s online store from mid-late September. Its fruity nose offers hints of nutmeg, oak and red berries – with a vanilla, cream edge. It’s rich and sweet on the palate, offering hints of salted caramel and black pepper for extra spice.

The Headliner’s finish is dry yet refreshingly fruity, allowing its predominant sweetness to gently taper away and spiciness to fade. It’s an altogether different taste that’s sure to surprise even the most ardent of Penderyn fans. Certainly, this ‘different’ twist is intentional – fans can expect that iconic rich, smooth Penderyn quality, but can also look forward to delightful, peppery sweetness.

“The Headliner is one of our most daring creations of the past decade,” says Davies. “I think it reflects the surprising changes that unfolded during Lloyd George’s time in charge. This is a whisky that isn’t afraid to show you something new, and to stand apart from tried and tested standards. You may expect it to taste a certain way, but you’ll be pleasantly surprised once you’ve tried its wonderful finish”

“Lloyd George accidentally created a whole new industry for Wales – one that’s booming from year to year. Without the Act of 1915, we wouldn’t be distilling and bottling our world-class single malts for fans and friends at home and abroad to enjoy. We certainly wouldn’t be in a position to produce exciting new bottlings like The Headliner so freely for the masses, either. So, let’s raise a glass!”

The Headliner is the latest in Penderyn’s celebrated line of bottlings in the special edition ‘Icons of Wales’ series, which is famously headlined by the award-winning Rhiannon single malt. Penderyn, based in Brecon, continues to produce whiskies that celebrate Welsh heritage and innovation – and have opened a second distillery site in Llandudno to reach further into Wales.

Penderyn’s The Headliner takes to shelves and online catalogues soon – offering a spicy, fruity celebration to help you welcome the forthcoming autumn.