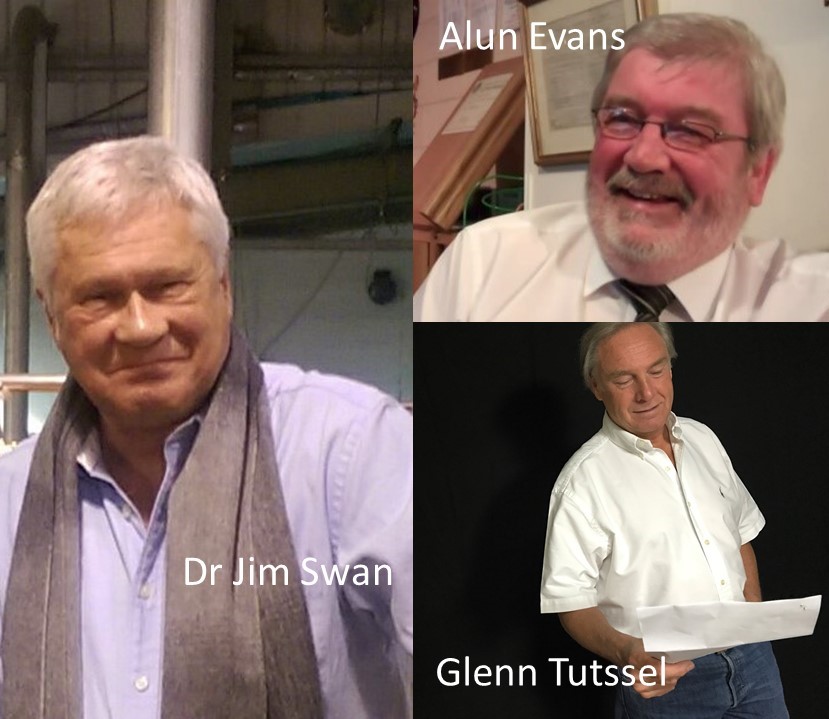 These three men are celebrated in the Exhibition Area of our Penderyn Llandudno Lloyd St Distillery. We thought we would post on our news page for everyone to see. In alphabetical order…

‘I heard there was a still for sale…’

Alun Evans was without doubt the central figure in the story of Penderyn Distillery. Back in the late 1990s, in Alun’s pub The Glancynon Inn, or ‘The Glan’, in Hirwaun, one evening a discussion amongst friends took place on the subject of, ‘Where are all the Welsh entrepreneurs?’

Alun later discovered that there was an unused still for sale in Brecon, and had the idea of a creating a Welsh whisky company, which brought his extensive network of friends and contacts together. Using ‘The Glan’ in the early days as Penderyn’s HQ, and his old Gwalia stores as the site of the new distillery, Alun answered the question… that Welsh entrepreneurship was alive and well, and on a mission to succeed.

Gwalia Stores also had a supply of spring water beneath the building, which became the distillery. It’s true to say that without Alun’s maverick thinking, Penderyn would not exist today.

This content is featured in our Penderyn Llandudno Lloyd St distillery in the Exhibition room. We thought we celebrate these important people for everyone to see.

‘The Einstein of whisky’

Dr Jim Swan was a consultant to the world-wide drinks industry assisting blue chip brewers, winemakers, distillers and cooperages, as well as smaller producers. Jim was approached by Alun Evans in the very early days.

Edwina Clark, one of our directors, and part of the original team, said, ‘I think he came on board because he realised the quality of our new make spirit was exceptional, and saw our potential.’ Having Jim on board not only gave us access to his many qualities, it also gave us credibility in the whisky industry. Jim became our Master Blender, instrumental in creating the house style of Penderyn – spirit matured in Bourbon barrels and finished in ex-Madeira wine casks.

Jim was happiest when sharing his knowledge, and trained our distilling team not just to create great whiskies, but to embrace innovation.

‘I am in the business of the big idea, beautiful crafted.’

Glenn Tutsell was born in Barry and introduced to the company by Professor Brian Morgan, one of the original investors. Highly talented and already very successful, Glenn listened to the brief, which included no stereotypical Welsh designs – so no daffodils, or women in tall black hats. Penderyn wanted to create a modern brand which looked forward, and so Glenn ingeniously produced the story of Aur Cymru (Welsh Gold).

Glenn had a long history working with firms like BP, Diageo and Royal Mail, and had risen from humble beginnings to the very top of his game. He was also a proud and passionate Welshman and told CEO Stephen Davies, ‘I want to work for Penderyn. I want to work for Wales.’

Penderyn became a labour of love for Glenn and everywhere we look we see his work. His finest achievement, with regard to Penderyn, was his superb and inspiring design for our Gold Range bottle, which was launched in 2017.