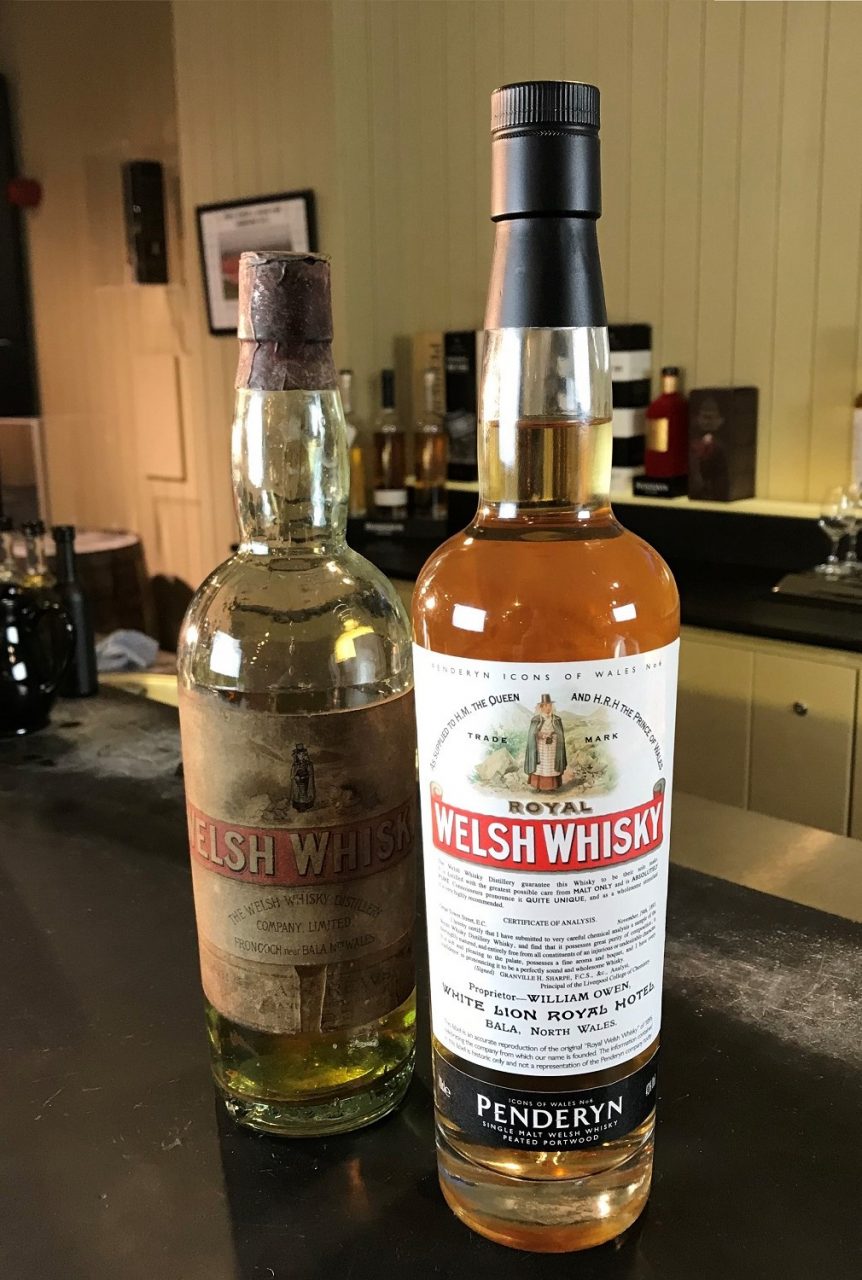 Penderyn was the first distillery in Wales for 100 years. The previous Welsh Whisky Company was in Frongoch, near Bala.

Queen Victoria visited there in 1891 and on the 26th July 1895 the Welsh Whisky Co. received a warrant, and Royal Welsh Whisky was born. However, it was hampered by the temperance movement inside Wales and, unlike Penderyn, it remained a curiosity outside of Wales. Despite a sustained advertising campaign, the company was wound up in 1903.

Bottles of Royal Welsh Whisky now sell for several thousand pounds, and as a nod to their distilling predecessors, a new Penderyn ‘Icons of Wales‘ Single Malt Whisky (#6 in the series) is modelled on an original 19th century bottle. It is launched, appropriately, on St David’s Day.

The whisky is a Peated Portwood finish and has an abv of 43%. The RRP is £45. It can be bought online here: www.penderynstore.com.

The distillery later became a Prisoner of War camp, housing German soldiers in WW1. After the Easter Rising in Ireland in 1916 the Germans were shipped out and the Irish moved in. The building has since become known as ‘The University of the IRA’.

The distillery was later demolished – stone and bricks were taken elsewhere and re-used – but there are a few remaining buildings on the outskirts of the site. Penderyn recently visited to make a promo video with top Welsh actor Julian Lewis-Jones (Invictus, Justice League, Where The Heart Is – see pic below), and were shown around by local expert Alwyn Jones. He showed them the last brick that remains from the once mighty distillery chimney.

Little is known about the original whisky itself, but adverts state that it was a 5-year old peated malt and, rather fancifully, ‘…is the most wonderful whisky that ever drove the skeleton from the feast, or painted landscapes in the brain of man’.

Stephen Davies, Penderyn’s MD said, ‘This is a great chance to celebrate Wales’ whisky heritage and the original Welsh Whisky company at Frongoch. Creating a global brand is a massive challenge, and we are proud to create award-winning whiskies which travel from Wales to the world, and this bottle pays homage to those early Welsh whisky pioneers.’