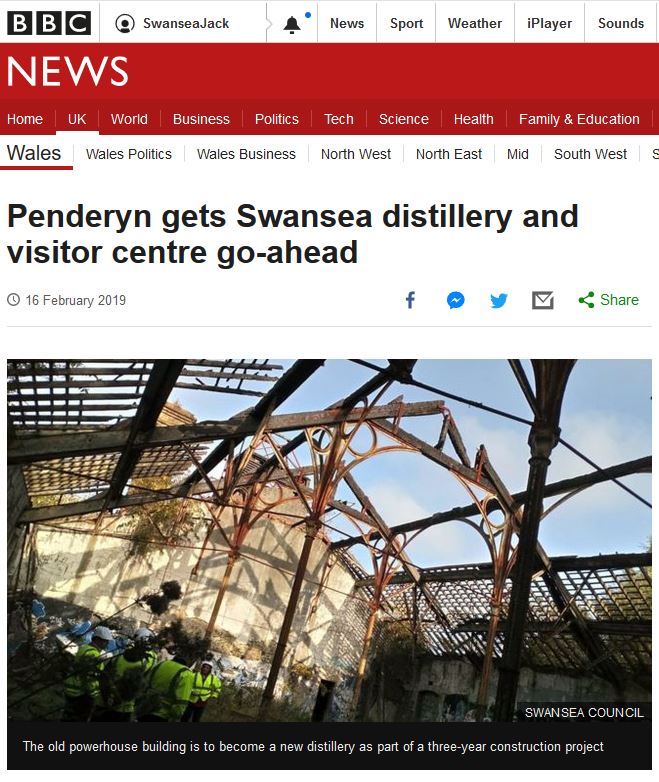 Plans for Penderyn to open a second distillery and visitor centre in Swansea have been given the go ahead. Penderyn Whisky is to redevelop a disused building at the historic Hafod Morfa Copperworks site in Swansea, which is just opposite the Liberty Stadium, home of Swansea City football club.

The Lottery Heritage Fund awarded £3.75m towards regenerating the 19th Century Powerhouse building into the visitor centre and distillery. The distillery will be housed in the old Powerhouse, a once fine building that has fallen on hard times. As part of our restoration we will replace the clock tower, which informed thousands of people for many generations what the time was. Latterly the building became a canteen until the site closed in the 1960s. Penderyn will also be building a new Visitor Centre alongside and to the rear, which will have three storeys. Inside will be a Penderyn Whisky exhibition area, shop, a tasting bar, conference suite and an exhibition covering the history of the old Copperworks

Stephen Davies, Penderyn’s Chief Executive said:  ‘Penderyn are delighted to bring back a copper-based industry back to this area. Once opened we hope to see up to 100,000 visitors a year, and it will become one of the major attractions in the area. This all helps us promote our whiskies from Wales to the world.’

Penderyn won 10 international gold medals in 2018 and exports to over 40 countries, and we hope construction will begin at end of this year with the facility opened 2022.

It was also featured in this Spirits Business article.