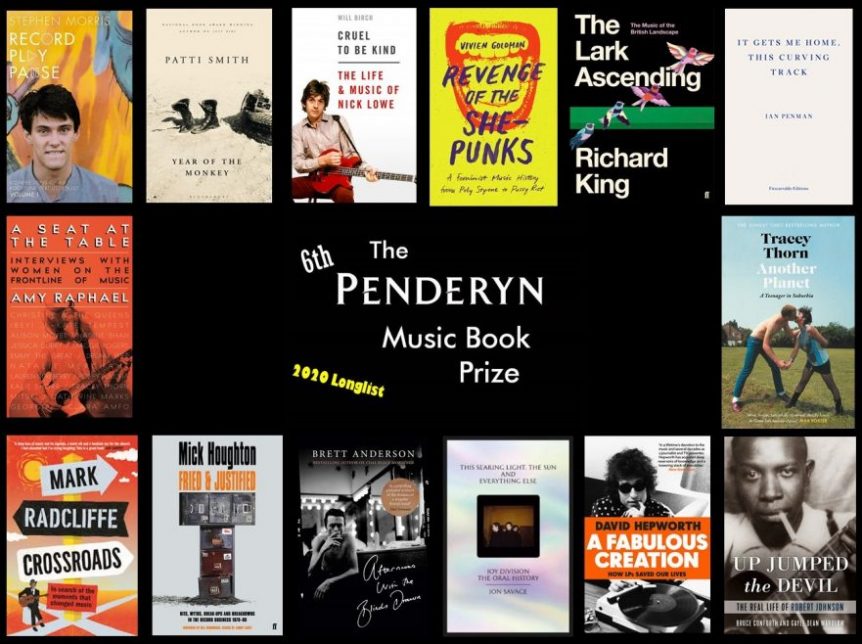 Long-awaited memoirs from musicians Bruce Springsteen, Johnny Marr and Robbie Robertson have all made the longlist for the 2017 Penderyn Music Book Prize. Now in its 3rd year, the prize is the only UK-based book prize specifically for music titles (history, theory, biography, autobiography). It was recently described as ‘The Mercury Prize of books’ by the NME.

The shortlist will be announced in early March and the winner is announced at the Laugharne Weekend Festival on 9th April 2017. Stephen Davies, Penderyn’s Chief Exec, said, ‘Penderyn Distillery are delighted to sponsor this prize. On a personal level, I’m a huge music fan, and it’s very exciting to see so many great books on the long list.’

The Rise, The Fall, and The Rise by Brix Smith Start (Faber); Small Town Talk:Bob Dylan, The Band, Van Morrison, Janis Joplin, Jimi Hendrix & Friends in the Wild Years of Woodstock by Barney Hoskyns (Faber); Anarchy in The Year Zero: The Sex Pistols, the Clash and the Class of ’76 by Clinton Heylin (Route Publishing); Into The Maelstrom: Music, Improvisation and the Dream of Freedom by David Toop (Bloomsbury Academic); I’m Not With The Band: A Writer’s Life Lost in Music by Sylvia Patterson (Sphere); The Age of David Bowie by Paul Morley (Simon & Schuster); Young Soul Rebels: A Personal History of Northern Soul by Stuart Cosgrove (Polygon). The Last Great Event: with Jimi Hendrix and Jim Morrison – When the World Came to the Isle of Wight, Volume II, 1970 by Ray Foulk and Caroline Foulk (Medina Publishing); 1971 – Never a Dull Moment: Rock’s Golden Year by David Hepworth (Bantam); Testimony by Robbie Robertson (William Heinemann); Shock and Awe: Glam Rock and Its Legacy, from the Seventies to the Twenty-First Century by Simon Reynolds (Faber); Set The Boy Free by Johnny Marr (Century); Born To Run by Bruce Springsteen (Simon & Schuster); Let’s Make Lots of Money: Secrets of a Rich, Fat, Gay, Lucky Bastard by Tom Watkins (Virgin)

Quotes from this year’s judges:

‘I’m looking forward to judging this prize, which shines a light on great music writing – a genre that often gets overlooked. It’s a strong and varied long list, with a good range of different voices and different perspectives.’ Tracey Thorn, singer and writer

‘This seems to be a vanguard time for serious music journalism as printed word. In 2016 with memoirs by Bruce Springsteen et al in tandem with critical expositions from Simon Reynolds and Paul Morley it’s as if the most engaging music is being made by writers.’ Thurston Moore, Sonic Youth