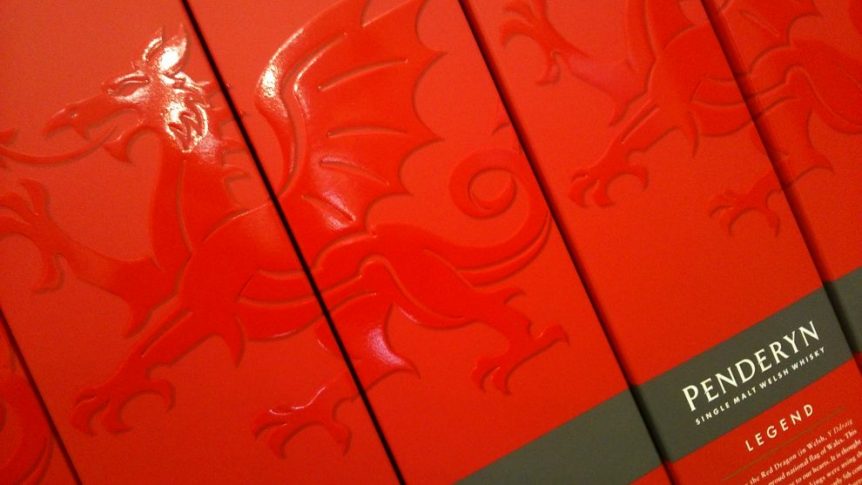 Penderyn produce two ranges of single malts: a premium 46% range and a 41% range. Last year our European partners suggested we incorporated a design that represented Wales‘ proud heritage, and what is more Welsh than the fiery dragon that features on Wales’ national flag? Penderyn are therefore proud to present the ‘Dragon’ range of 41% whiskies: Legend, Myth and Celt. Legend has a Madeira finish; Celt a Peated finish and Myth is a first for Penderyn, a whisky that spends its life exclusively in Bourbon casks. Each is presented in a handsome new pack created by design wizard Glenn Tutssel, of Brand Inspiration.

The Royal Welsh badge bears the motto: ‘Y ddraig goch ddyry cychwyn’ which translates as, ‘The red dragon inspires action.’ The dragon features in ancient Welsh tales and was the battle standard of mythical Celtic kings. Welshman Henry Tudor took the flag to Bosworth where, in 1485, he became the last king of England to be crowned on the battlefield. Today the dragon is seen as representing all things Welsh and epitomises Penderyn Legend.

Commercial Director Sian Whitelock said, ‘The dragon on the packaging is a new animation of the traditional Welsh dragon. The re-branding has already proved highly successful in Europe, as well as with UK retailers.’