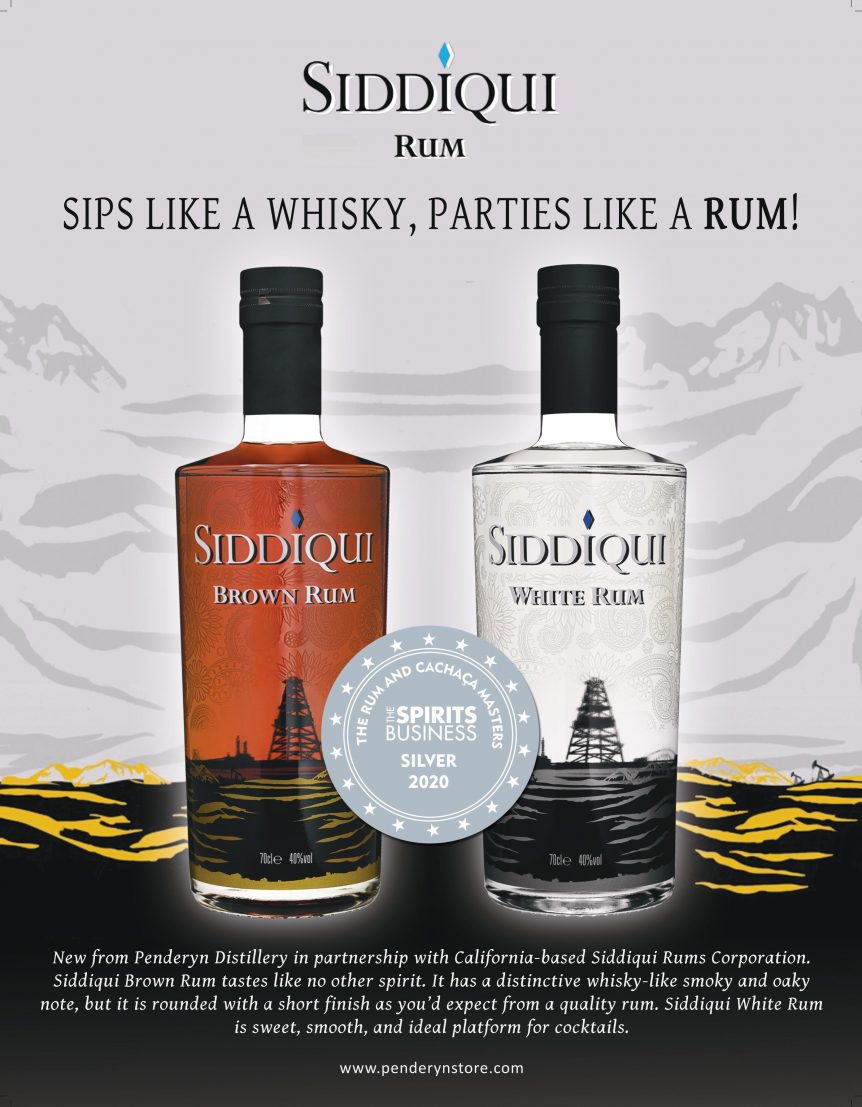 Penderyn are delighted to announce that they won two silver medals at the recent Spirits Business Rum Masters.

“We are very pleased to win these awards. This is a great result as we only launched these rums a few weeks ago. We are very excited by this new partnership with Siddiqui Rums producing their rums for the international markets, and these awards bode well for the future.”

Siddiqui Rums have a great back story as the original recipe was based on a spirit distilled by ex-pat oil workers in the Middle East. Below is a lovely piece of writing on Siddiqui Rums and its history by respected Whisky & Spirits journalist Dominic Roskrow.

‘Is it possible for one word or or one brand of spirit to encapsulate an entire way of life?

It’s a big ask, but for tens of thousands of oil men and ancillary employees who worked in the oilfields of the Middle East over the last 70 years, the word  ‘Siddiqui’ will conjure up images of gruelling, hot and heavy labour under clear Arabian skies, and chilled evenings around the fire, with the tranquil Persian Gulf in front of them and star-strewn skies above.

Siddiqui – pronounced Sad-e-key – was a way of life for American workers spending months away from home in the harsh lands of the Middle East  as they sought for, and extracted, oil. Part guilty secret, and part tonic for the troops, Siddiqui gave solace to thousands of  workers living in a harsh climate and an alien environment.

“I sometimes wonder how influential Siddiqui has been over the last half century,” says brand owner Nigel Brown, who is about to oversee the spirits drink being launched into the United Kingdom.

“It’s a bit of a stretch but it’s possible that the Middle East would have been a different place without it. It was so much part of the lives of those ex-Pats over the decades.  The idea of being able to have a relaxing drink at the end of a hard day would have made life tolerant for many.”

Siddiqui – the name is Arabic for ‘my friend’ – is unique. It is a spirit that was created specifically to reflect a period of American culture and history, to serve the needs of a specific market. It exists as a response to the widespread ban of alcohol imports and sales in the Middle East in1952. The Americans worked closely with their Arabian hosts on what was effectively a code of conduct. An unofficial agreement was reached that that your home was your castle – and what happened behind closed doors would largely be ignored.

So Siddiqui – affectionately known as Sid – was, technically,  an an illicitly distilled spirit. But its production wasn’t just tolerated – it was actively encouraged. New arrivals to the oil fields were offered the chance to buy a still for $100 and were given a copy of the legendary booklet The Blue Flame, which included details of how to make a still, and recipes for how to make spirit. Competition to make the best spirit was fierce, and the recipes were regularly updated. Some of the production was on an industrial scale, with large stills built in airplane hangars on the camps, and Chevy engines in particular converted in to condensers. There are stories of individuals making thousands of dollars – a fortune in the 50s and 60s – from their alcohol production.

“The Middle East has the third biggest ex-Pat population in the world after The Philippines and India,” says Nigel Brown. “The Americans in the Middle East were keen to have a drink that was like whiskey. And that started what was to become the largest moonshine culture on earth.”

Brown, a graduate of Sacramento University, California, worked in the oilfields of the Middle East. On his return he was determined to recreate Siddiqui using the original Blue Flame recipe. Obsessed even. But without resources or knowledge of how to access the liquor market or market a spirits drink, he faced a mountain. Over the coming years he would put everything he had in to making a dream come true – at great cost, both professionally and personally.

“I did everything myself,” he says now. “I did all the licensing applications and learned how to get them through. I worked on all the fire safety requirements so that I could have a legal warehouse. I worked on the brand and the bottle, and all the time I was worried about when the timing would be right.

“I gave up everything  and moved in to a trailer home on a site where there were all sorts of colourful people living. And all the time it was like I had an angel on my shoulder, telling me to wait, be patient. You’ve got this, it would say, this is all yours. Just wait for your moment.”

That moment came in 2013. America had undergone a huge micro-brewing boom and now those in high office started to see the potential of micro distilling. State by state the authorities started to issue licences, realising the potential for tax generation, job creation and a boost to tourism.

“It took a couple of years to get up and running, but we started selling Siddiqui in Northern California, and the oil territories of Texas,” says Brown.“And the reaction was always the same. Siddiqui brought back fond memories, and ex oilmen kept coming forward wanting to share their experiences.”

And that could have been that. Now, though, the distinctive rum is about to make its debut in the United Kingdom, and is set to be distributed and marketed by Welsh distiller Penderyn. How on earth, then, do you pull together a North Californian entrepreneur with a Welsh whisky company, linked by a rum conceived in the deserts of Arabia?

Talk to Nigel Brown for any length of time, and not only will his enthusiasm for Siddiqui and its backstory become evident, but he also believes that everything happens for a reason. He talks about a matrix, but you could easily refer to it as fate, or even spiritual intervention. And when you hear how we have ended up tasting Siddiqui on a very miserable night in the Brecon Beacons – about as far way from Riyadh or Kuwait as you could possible get – then you see his point.

Stephen Davies, managing director for Penderyn, takes up the story:

“I own an apartment in Spain and we try and get away to it ever year, and the apartment above us is owned by an American called Rick Chimblo. We got to know each other and would meet for a drink. Each year he would give me a taste of his own ‘whiskey’, and he’d tell me about this man in Northern California who was doing these wonderful things with his brand.

“Then one year he told me that he had become chairman of the business, and gave me a bottle to take home. I gave a taste to the late Dr Jim Swan, and after nosing it he said it was very nice, but it wasn’t whisky. On further investigation it turned out that the recipe was based on sugar, and this was a rum.

“After that I left the bottle sitting on my desk. Then one day our chairman Nigel Short came in, saw the bottle, and asked about it. I told him that he wouldn’t be interested in it because it was a rum, and I told him the whole story. Nigel loved it – and everything went from there.”

There are two expressions of Siddiqui – a white rum that is sweet, smooth, very drinkable, and ideal as a platform or cocktails. It comes in a stylish and clear bottle through which the silhouette of an oilfield is visible. In a crowded and competitive market place it is well placed to find an audience due to its unique back story, its competitive pricing, and its premium packaging.

But it is Siddiqui Brown that will create waves. Described as a spirit ‘that sips like a whisky and parties like a rum’, it tastes like no other spirit. It has a distinctive whisky-ish smoky and oaky note, but it is rounded with the shortest of finishes, as you’d expect from a quality rum.  Both the name and the taste will evoke memories for tens of thousands of oil and ancillary workers, and already Brown and his new allies at Penderyn are looking towards the potential of a club-like relationship between brand and drinker.

“When I taste it I am taken back to the warm sands of the Middle East at night time, sitting around a fire overlooking the Persian Gulf,” says Brown. “Sipping Siddiqui with colleagues was the perfect way to relax at the end of a hard gruelling day in the sun. Lots of people who were in the Middle East will relate to that.”

So can a single word and one spirits drink single-handedly and successfully represent an era, a slice of history and a distinctive way of life?

Only time will tell, but that’s what Siddiqui is trying to do. And if you buy in to Nigel Brown’s matrix world view, it’s got every chance of succeeding.’