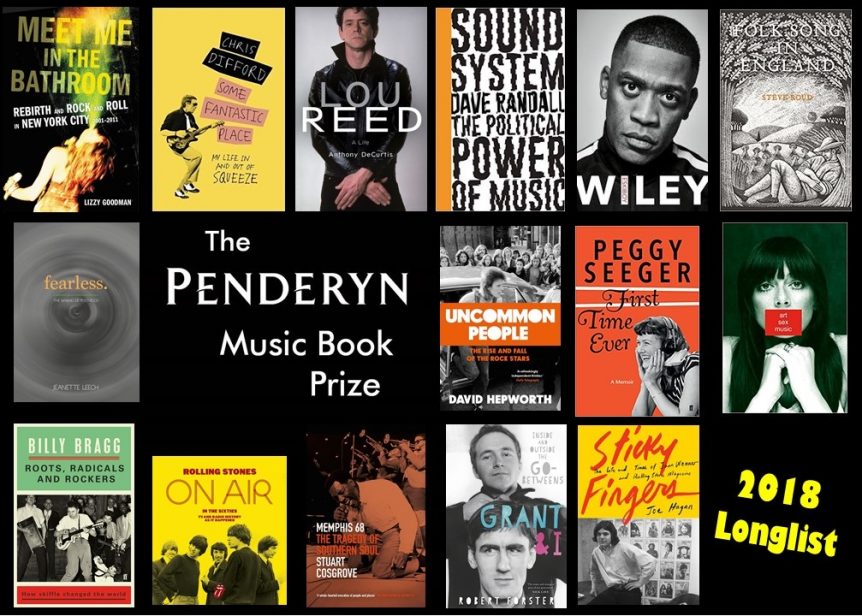 The Penderyn Music Book Prize 2018 has announced this year’s longlist – a smorgasbord of musical genres from Billy Bragg’s history of skiffle to Wiley’s grime memoir; from a study of the tradition of English folk music to an exploration of the rise and fall of the Rock Star. Now in its 4th year, the prize is the only UK-based book prize specifically for music titles.

‘The Mercury Prize of books’ NME

The shortlist will be revealed in early March and the winner is announced at The Laugharne Weekend festival on Sunday 8th April 2018.
The 2018 Penderyn Music Book Prize longlist:

Roots, Radicals and Rockers: How Skiffle Changed the World by Billy Bragg (Faber); Some Fantastic Place: My Life In and Out of Squeeze by Chris Difford (Weidenfeld & Nicholson); First Time Ever: A Memoir by Peggy Seeger (Faber); Sticky Fingers: The Life and Times of Jann Wenner and Rolling Stone Magazine by Joe Hagan (Canongate); Fearless: The Making of Post-Rock by Jeanette Leech (Jawbone); Meet Me In The Bathroom: Rebirth and Rock and Roll in New York City 2001 – 2011 by Lizzy Goodman (Faber); Memphis 68: The Tragedy of Southern Soul (The Soul Trilogy) by Stuart Cosgrove (Polygon); Art Sex Music by Cosey Fanni Tutti (Faber); Lou Reed: A Life by Anthony DeCurtis (John Murray); Sound System: The Political Power of Music by Dave Randall (Pluto); Eskiboy by Wiley (Heinemann); Grant & I: Inside and Outside the Go-Betweens by Robert Forster (Omnibus); Uncommon People: The Rise and Fall of the Rock Stars 1955 – 1994 by David Hepworth (Transworld); The Rolling Stones: On Air in the Sixties by Richard Havers & The Rolling Stones (Ebury); Folk Song In England by Steve Roud (Faber)

Stephen Davies, Chief Exec of Penderyn Distillery said, ‘We are delighted to sponsor this prestigious prize. The 2018 long list has a wonderfully varied selection of books, and we look forward to the shortlist announcement in March and the prize ceremony in Laugharne.’