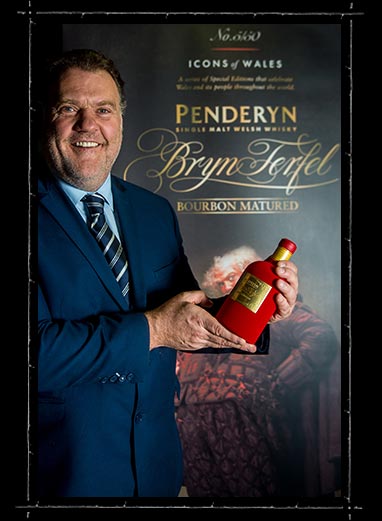 Tuesday November 29th saw the launch of the new Icons Of Wales edition – Bryn Terfel. The launch took place in the magnificent foyer of the Royal Welsh college of Music & Drama in Cardiff. Bryn himself was there, and made a great speech in front of the invited audience of 250 guests.

This whisky celebrates Welsh opera singer Bryn Terfel and more specifically his favourite role: Falstaff. The whisky is well-rounded, spicy and sumptuous and has a theatrical element to the design, which all reflect the wonderful character of Falstaff.

Falstaff was the last opera written by Giuseppe Verdi, from a libretto by Arrigo Boito, and was premiered in 1893 at La Scala in Milan. A light comedy, based on the eponymous character who first appeared in three of Shakespeare’s plays, it is believed by many to be Verdi’s greatest opera. The plot revolves around the tubby, egotistical, drunken yet charming knight, Sir John Falstaff, as he attempts to seduce two married women in order to gain access to their husbands’ wealth.

Welsh bass-baritone, Bryn Terfel CBE, was born in Pant Glas, North Wales in 1965. He sang traditional Welsh songs from an early age, appeared in Eisteddfodau and graduated from the Guildhall School of Music in London in 1989. Ten years later, inspired by Sir Geraint Evans’ anecdotes about his own experiences playing Falstaff, Bryn Terfel first took on the role at the Sydney Opera House. Bryn Terfel’s Falstaff has come to be regarded as one of the great opera characterisations of modern times with critics commending his sheer power, virility, humour, nobility, exceptional command of tone and language, and his intoxicating exuberance. However, the character is never to be taken lightly, as Bryn himself explains:

‘Although it delights me to be asked to perform the role there are many pitfalls. That first scene – so difficult – makes me stupidly competitive. I want to succeed. I am desperate to succeed. Have I mastered it? No! But next time I will try even harder. Whereas the beginning of Act III is a joy and possibly my favourite operatic scene of all. Falstaff can trip you up at any time. The make-up, heavy costumes, wigs, beards, false bellies all help create the impressive ‘Falstaffian’ appearance, but the acting and singing is a tremendous challenge for any bass-baritone, requiring huge amounts of commitment and concentration. However, once the preparation is done and you stand in the wings and hear the first chords, a smile spreads across your face which lasts the whole performance.’

TASTING NOTES
The nose is smooth and creamy. There are notes of honey, vanilla ice-cream and a hint of banana chips. On the palate the experience is well rounded and rich, and full of fruits, sweet apples, vanilla and a tone conjuring up a nostalgic memory for banana splits. The finish contains honey which is followed by another evocative tone – cream soda – along with the late arrival of a lingering woody spice.